Historically, turquoise is one of the first gemstones to be mined and used in jewellery by human beings. It is one of the three birthstones for those born in December. The naturally designed stones come adorned with cultural significance and ancient medieval lore. Turquoise stones are known for its naturally occurring gorgeous hues that ranges from powdery blue to a stunning “robins’ egg” blue.

The colour and its historical significance have made turquoise one of the most favourite gemstones amongst jewellery wearers.

Turquoise is a polycrystalline copper material that occurs typically within thin seams and small nodules. Turquoise is found typically in dry and barren areas with arid regions where copper is leached from rocks and then reacts with aluminium and phosphorous. This results in a reaction and forms porous, semi translucent to opaque compound of hydrous copper aluminium phosphate with some evidence of iron. The copper in the stone gives it the blue hue whereas the presence of chrome and iron add the tonal variations with the hues of green.

Most of these stones come with small patches or veins that look like spider webs across the stone, typically in brown or black host rock. This is the matrix. The presence of these matrix often lowers the price of the stone. Some buyers however, actively look for these veins as they add character to the stone, making it more unusual and attractive.

In terms of market value of the stone, turquoise completely free of these veins, typically cost a lot more than the once that come with them. Those with evident spider web patterns that make the stone look attractive come a close second, when it comes to the prices of these stones.

Turquoise is largely found in the United States, Egypt, Iran and China. The earliest evidence of the presence of this stone dates to about 3000 BC, under the reign of Emperor Tut, with the oldest known mines located in the Sinai Peninsula in Egypt. Extraordinary jewellery pieces with elaborate display of the turquoise stone were found on the gold jewellery of many Egyptians, and the most extravagant piece of turquoise was found on the iconic burial mask of the Emperor himself.

The people in Ancient Persia believed that the turquoise had properties that would guard them from harm. Many of the palace domes were adorned with sky blue gemstone – which they believed represented heaven.  Additionally, ancient Persians engraved Arabic script into turquoise stones which would then be studded on their daggers and horses’ bridles. The highly valued “ Robin’s egg” blue colour which is also known as “Persian Turquoise” was revered by the people of  Persia (or now known as Iran), as well as Siberia, Tibet, Turkey as well as Afghanistan. The Turkish traders were the ones who introduced “Persian Blue” stone to the western world, specifically the Europeans in the 13th Century through Silk Road.

Most Turquoise has a smooth and waxy lustre that comes with a tightly packed crystal structure, low porosity and a fine texture. The texture of the stone affects its porosity and its overall appearance and has a direct influence on the durability of the stone as well.

Turquoise is a fairly soft stone which made it a popular choice amongst carvers in ancient history. Even in America, carvers fashioned turquoise turning them into amulets of Native American significance such as birds and animals.

The stone has a hardness level of 5 ½ - 6 on the Mohs scale of hardness making it fairly tough and can be used in jewellery. However, it is much less tough than most other stones and gems. This stone is sensitive to direct sunlight and irritants and chemical solvents such as perfume, oils and makeup removers and products. The porosity of the turquoise makes it imperative for the jewellers to polish it and treat it with paraffin compounds to increase its durability.

Turquoise has been, over several ages, admired as a stone that carries a sentiment and a meaning for multiple cultures. Being one of the most ancient gemstones, this highly regarded stone has been used to decorate artefacts for many many years. In Tibet, turquoise has been regarded as a symbol of good health, fortune and success. It has also been referred to as a token of protection and considered to be a good omen warding off evil spirits and giving power to the wearer. 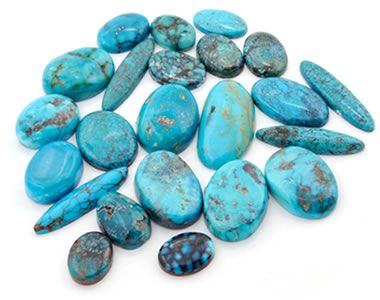